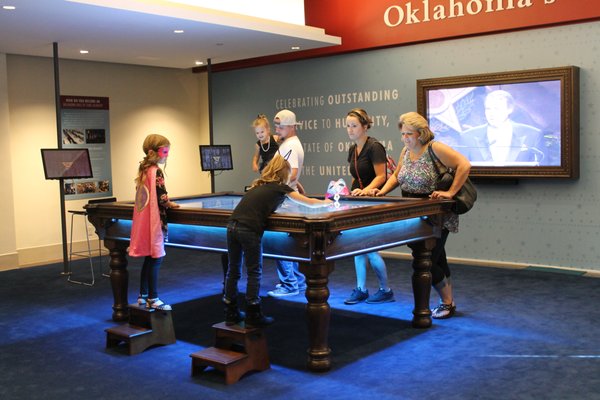 There are no reviews of
Oklahoma Hall of Fame.
Be the first to ⭐ Write a Review.

Oklahoma Hall of Fame Publishing has released Oklahoma Adjusts to War by Larry A. Lewis and is now available here, and in the museum store. Learn more about the people and the impact of war on Oklahoma society in this important book. More

The Oklahoma Hall of Fame was founded by the Oklahoma Memorial Association, a group founded in 1927 by Anna B. Korn with the purpose of establishing the hall of fame. In the 1970s, the Hefner Mansion was donated to the association to house the exhibits and busts or portraits of the inductees, and the organization changed its name to the Oklahoma Heritage Association in 1971. More

Spend a few minutes browsing the many titles of books distributed by Oklahoma Hall of Fame Publishing - the Leader in Publishing Oklahoma's History. You can also find that perfect Oklahoma-themed gift for your friends and family in the museum store. More

The Oklahoma Hall of Fame believes that there are no limits to what is possible. Every day we celebrate the legacy of inspiring Oklahomans with all generatio... More

City of Guthrie State of Emergency Declaration 03-16-2020 In response to the COVID-19 global pandemic, Mayor Steve Gentling has proclaimed a state of emergency for the City of Guthrie. Below you'll find the links to a summary of actions included in the proclamation, as well as the proclamation in its entirety. More